My fascination for flags has been growing each year.

A flag can evoke positive and negative associations. It is a national symbol that can be used to express love for a country, but can also be misused for extreme nationalism.

I paint flags and as such it is a symbol in form and color. But it's more. The way I paint my flags is a process of processing emotions. This happens consciously and unconsciously, it grows and exists alongside the artistic process.

When I saw a newspaper photo in 1995 on which the Israeli flag was burned during a Palestinian demonstration, my fascination for flags began. I was touched by it, because for me it meant a violation, a disrespect and want to banish what I love. I experienced the burning as the overriding of human rights in general and of the Jewish people and Jewish history in particular.

In response to this photo, I decided to make flag paintings. During the painting the gravity of the collective Jewish struggle became clear to me and the constant tension and tension that the struggle and its defense require. It raised questions about me about the present, the past, and the future: does it remain a struggle or can a better society ever be created between the Jews, the Palestinians and neighboring Arabs? While painting I wanted to explore answers to these questions.

In the prayer flag the natural elements of air, water, earth and fire are symbolized by appropriate colors. The flags are attached to specific places in nature such as on trees, over a river, but also on houses, temples and holy places. A special event, such as birth or death, can be the reason to place flags. The intention of these religious flags and the idea behind them touch me on a soul level and make me hopeful. Could flags also send out wishes of peace for the Jewish-Palestinian conflict? 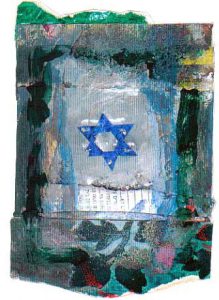 The use of flags

I paint intuitively and associate freely. The movement of my hand on the canvas (or on paper) in combination with color and texture determines the result.

In my job the paper or canvas is the surface on which the conflict takes place. I use the Israeli and Palestinian flag as a symbol. It is an attempt through my work to get a grip on what the battle is really about and where it leads to.

in my artist's books it is also about the struggle and the pain of the people facing each other.