About my work as a visual artist

About this project:
This subject has given my work a different twist in image and language.
Vroeger werkte ik abstract en nu werk ik figuratief.

The work consists of drawings and that is a conscious choice. Drawings felt more direct and powerful.
I steered the process from an inner strength.
It helped me with the confrontation of what was going on at the time and its processing,
the development of strength in the new situation.
In addition, it created a positive image for the future.

About the creation of the work:
Usually the work came about in two drawings. The first work represents the present. The second work I want to go to.
I also use text in the work. Text, in my native language, Hebrew.
There are cultural associations (for explanation see the attached Word documents).
In PDF with explanation / language, for the work referring to the plagues of Egypt.

Mazal Sartan.
In Hebrew, "mazal" means luck and also zodiac sign.
The word "sartan" means lobster, the horoscope (and also my zodiac sign).
The word "sartan" also means cancer. This is how it becomes: Cancer Happiness. (In Hebrew it therefore has a double meaning. Crab and cancer are the same word in Hebrew.)
Fortunately, "lobster with luck" sounds much more positive than the word cancer, it gives hope. I want to create life and happiness in every situation that occurs. That is why I chose this name.

The work is also functional. It is for processing and confrontation with what is now. In addition, it creates the future in images. I send the event from inner strength. 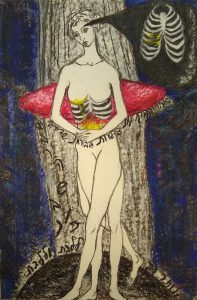 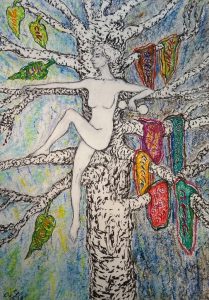 I was born in Israel in 1953. The family I grew up in was a Jewish Socialist family, in which many Israelis dreamed that there will someday be peace with our neighbors.

But there is still war. The occupation is bad for both peoples. There can be no respect between the nations, only hatred and fear.

Another culture from the desert mixes with European culture.
What will it be like for the guests and for the host, what will the future look like here?
Are you losing your own identity? the right balance? 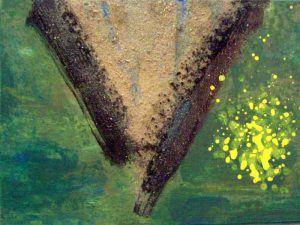 There is still no peace in my home country and life goes on. I have taken the way back in ...
I try to work from within. Be open to what will come. My inspiration is what I experience in life.

My work is about human and spiritual values.

Through my work I want to get the viewer thinking about the Jewish-Palestinian issue. This conflict is one of many in the world. Each party in the conflict brings its own cultural and historical charge in the form of collective memory, belief, hope and the thought: "We are right."

Theodor Herzl (1860-1904), Jewish-Austrian activist, journalist and publicist once said: "If you want it is not a dream." Bringing the state of Israel to life, a dream that was difficult to realize in its time, turned out to be possible. Will PEACE ever be possible in the Middle East?
"If you want it's not a dream"